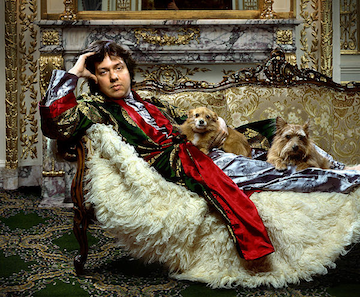 Dave Hill is a modern day Renaissance Man who has his hands in pretty much every artistic medium in the galaxy. As a writer he’s written for the NY Times, Salon, HBO, the Huffington Post, and Crash Test on Spike TV. His mug has been seen on MTV, Comedy Central, Adult Swim, and a gaggle of other networks, and his popular show, Kind of Miami now airs in the UK on Film24. He’s a frequent contributor to the radio program, This American Life, and has played guitar and sang for about billion different bands, some of which have toured all over the world.

His live show, The Dave Hill Explosion, has been seen on both coasts at the UCB Theatre and internationally. In 2007 he was named one of “10 Comics to Watch” by Variety, who said: “Whether he’s interviewing a pet psychic or Jimmy Kimmel, Hill usually manages to derail the conversation to his own insecurities with hilariously uncomfortable results.”

He once staged a one-man rendition of Cats during a layover in the Newark Airport. He is not the former NFL offensive tackle, Dave Hill.

You played in a lot of rock bands in the 90s – were you able to make a living off of music early on or were you still working day jobs?

I’ve never made a tremendous amount of money through music.  When my first band Sons of Elvis signed a record deal after college, I lived off just music for a while, but that was pretty easy since I was younger, touring a fair amount, and living with my parents in between.  Most of the time, I’ve done music in conjunction with other things.  But for better or for worse I haven’t had many “day jobs”, as in something I did just to pay the bills.  I’ve always tried to avoid it because it made me miserable and too tired to get anything else done.

Over the years, I’ve usually found ways to make money doing stuff I enjoy- freelance journalism, painting murals, doing graphics, and stuff like that.  I’ve picked up a few odd jobs here and there too.  I bartended one night a week, something I was pretty bad at but had fun doing, at my cousin’s bar in Hell’s Kitchen, for a while.  And back in Cleveland I used to pick up cow and pig eyeballs from a slaughterhouse once a month for eye doctors to practice laser surgery on.  I also worked at a homeless shelter for a bit, which I really enjoyed because it mostly involved talking to people and I would get free meals.

How did you decide to make the switch from focusing predominantly on music to comedy?

I never really decided to, it just sort of happened.  I started performing comedy in 2004 and things started to grow pretty steadily.  It was the path of least resistance I guess.  But weirdly, I’m busier now with music than I’ve ever been- playing in three bands, touring Europe next month and hopefully heading back to Japan at some point.  But comedy is definitely my main thing these days.  I love doing both comedy and music, so hopefully I’ll always be able to fit some rocking into my life in between comedy stuff.  When I’m working at home, I pretty much alternate between writing and then taking breaks to play guitar solos all day long.

You say that performing comedy was “The path of least resistance” – can you be a bit more specific about how you fell into that so easily?  Seems like the comedy thing has a LOT of resistance for most people at first.

By path of least resistance, I mean it didn’t feel like I was banging my head against a wall or anything.  I would do one thing and that thing would lead to another, more shows and little jobs, etc.  I’m not saying it was easy or is easy now, there just seemed to be a momentum to it.  And it was all very new to me since comedy wasn’t something I followed very closely before I got into it, so it was pretty exciting to become a part of as I had no idea what to expect.  I think if I had any real expectations of things when I started, I wouldn’t have necessarily viewed it that way.  But comedy is something I never really expected to get into as a performer, so there’s always been a part of me that stays excited about it.  It’s not like with music where I knew I wanted to play in a rock band when I was five years old.  I think when you have big expectations or an idea of what something will be, you can end up disappointed.

You got a job writing for a TV show on Spike early in your comedy career – how did that gig come about?

My friend John Kimbrough, whom I play with in one of my bands, Valley Lodge, was doing the music for a show called “Crash Test” on Spike TV in 2003.  I was living in Cleveland at the time but happened to be visiting him in New York.  He suggested the producer of the show, Katherine Dore, have me in to a writers’ meeting.  I came to a couple of them while I was in town.  A few weeks later, when I was back visiting New York for the weekend, I got a call asking if I wanted to work on the show full time starting the following week.  I just never went home.  I came to New York for the weekend and never left.  I would only recommend this if you have little attachment to personal belongings.

Since you began performing a lot at UCB and elsewhere, you seem to have amassed tons of random TV jobs.  Did you start getting those after people saw your live show?

Performing at UCB was definitely a turning point for me.  I had been performing for about a year when I got asked to showcase for the Aspen comedy festival at UCB.  At my very first show there were the people who are now my legit agent and my commercial agent.  So I was pretty lucky. And I’ve definitely gotten a lot of work through people seeing me at UCB in New York and LA.  I was a little nervous going to UCB at first because I had never taken any classes there or done anything there before, but everyone at UCB has been awesome to me from day one.  I would encourage anyone wanting to get involved with comedy to become a part of UCB.  In addition to performing live though, my website was definitely helpful early on in getting me work.

I think my website was and is a way for people to get a sense of me and what I do.  When putting it together, I tried to avoid having it be like an online resume or anything.  I wanted it to just be pretty retarded.  Like me.  So people could go there and see video, read stuff, and just get a get a general sense of what my deal is.  And from there they could decide if they wanted anything to do with me or whether they wanted to run in the other direction.

You write and perform and appear on “This American Life” and just do lots of different things.  Is it difficult not having one career focus or do you think it makes things easier?

It’s hard to say.  I like doing a lot of different things- writing, performing comedy, playing music, etc.- and I feel lucky to have some nice outlets to do those things.  Sometimes I think I might be better off just doing one thing, like maybe I could accomplish a lot more in a specific area if I just made that one thing my focus, but doing a lot of different stuff helps keep life exciting.  I just wish there were more hours in the day or two of me or something so I could do more of the stuff I like doing.  Who knows though- maybe one day I’ll just decide to do one thing and see what happens.

Was there a moment for you when you knew you could actually do what you wanted to do professionally without needing any outside income?

I’ve pretty much always made my living (though sometimes it’s been a very modest living) doing stuff I enjoy.  I’ve been stubborn that way.  Aside from occasional odd jobs, I’ve always made the bulk of my living doing some creative thing or another.  I’ve definitely had some really stressful times as a result of taking that approach though, so I don’t necessarily recommend it unless you don’t mind living like a caveman every once in a while.  I would say that it was about 3 1/2 years ago when I was fully just doing things I was passionate about for my income.  I had just started filming “The King of Miami” (my first and hopefully not only TV show) and had a few other projects keeping me pretty busy.  I was finally making my entire income from having fun and acting like a moron all day.  It felt like a milestone.

I guess it’s a bit of a cliche, but go with your gut and don’t get caught up in what other people think.  And entertain yourself first because if you are not a fan of what you’re creating, it will usually end up sucking.  I think sometimes people put what they think an audience might like or what another comedian, writer, or musician might do in a particular situation [ahead of] what they are truly into.  To me, the result of that is always way less interesting and original than stuff that people come up with just trying to entertain themselves.  And no one ever got as big as the Beatles by ripping off the Beatles.

All of that being said, however, it’s always good to identify a few people- close friends, fellow performers, your manager, etc.- whose taste and judgment you respect to bang stuff off of when you need to.

Photo by Dale May