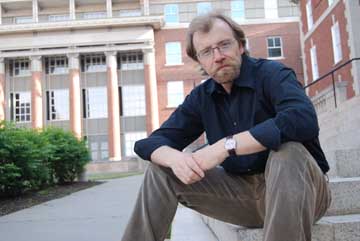 George Saunders is the best-selling author of five works of fiction and one work of essays. His first story collection, CivilWarLand in Bad Decline, was nominated for the PEN/Hemingway award, and he has been nominated four separate times for the National Magazine Award in fiction.  In 2006, He was awarded a MacArthur Genius Grant for being a genius.  His work has appeared in numerous publications, including The New Yorker, Harper’s, McSweeney’s, GQ, The Guardian (for which he had a long-running column) and many others.

Michiko Kakutani of the New York Times calls him the “illegitimate offspring of Nathanael West and Kurt Vonnegut,” and Thomas Pynchon lauds his “astoundingly tuned voice—graceful, dark, authentic, and very funny.”  He currently teaches at Syracuse University, where he also received his MFA.

His story, Sea Oak, is probably this interviewer’s favorite short story of all time.

Do you remember the first time you were paid for your writing?

Yes. I got paid $50 by the American Legion, for writing an essay on “What It Means to be An American.” As I remember, it was a total know-your-audience kiss-up piece. You know: “My pride is based on my feeling of feeling proud about the beauty and pride our country does, in fact (because it is so peerless), really make me feel!” Second place went to this African-American kid who wrote about his love for America in light of his complicated feelings vis-à-vis racism. An early lesson that merit does not always get fairly rewarded. For me and for him, I would imagine.

You graduated from the Colorado School of Mines with a B.S. in geophysical engineering, so is it safe to say you weren’t quite sure yet that you wanted to be a writer?

Right.  I had this romantic/naïve idea that, someday, when ready, I’d crank out a quick and wonderful autobiographical novel à la Thomas Wolfe, and therefore felt no urgency about actually sitting down and trying to write something.  I really liked the part where you fantasized past that part, to the part where you had already written a book and were soaking up the praise.  At that point the only thing I was actually writing was the occasional overheated Kahlil Gibranesque diary entry.  (“What then shall we tell the children of love?/  Tell them it is like a flower/ which groweth well when tended well./When left untendedeth, it, doth tend, you know, to droopeth.”  And so on, until the reader starts throwing up.)

What kind of jobs were you working in those seven years between graduating from Colorado SofM and getting your MFA in fiction from Syracuse?

I worked as a geophysicist in Sumatra, then came home and roamed around for a few years.  I worked in a slaughterhouse, as a doorman in Beverly Hills (very uplifting), as a roofer.  I played in bands, worked in a convenience store, was a barback at a dance club, worked as a groundsman – a little bit of everything, really.  While I was farting around in this Kerouac phase, the oil business went bust, and my credentials, such as they were, got a little dusty.  So by the end of this period I had more or less dissipated my college degree.

Was there a specific inspiration for deciding to get an MFA?  How did you come to make that decision?

Well, I had more or less dissipated my college degree.  Actually, I was at this wild(ish) party in Amarillo, Texas, and staggered away from the main festivities, and found a People magazine on a table.  In there was an article about Jay McInerney and Ray Carver.  It was the first time I’d ever heard of an MFA program, and at that point, starved as I was for positive attention, it looked pretty good to me.  I was getting kind of scared, actually: I could see myself sinking down into a life where no money meant no writing.  And I had also just started to get an inkling that my “native talent” wasn’t all that impressive, and that a lot of real work would be involved in ever writing something decent.  So the panic was comprised of that realization, plus the realization that, as I got older, time would become harder and harder to come by, especially if (as I was beginning to) I ever wanted to have a family.

After getting your MFA, you worked an environmental engineering job for quite some time.  Was it easy to balance your own writing with this work?

Yes, via a technique I like to call “stealing.”  I was billing all my time and so would just carve out some (illicit) time from my “real” work.  But actually it wasn’t all that easy – sometimes this was just ten minutes, or less.  But I did get to know the system, and how to work it, and also I found that I was much more comfortable being a corporate guy, with a steady income, who pushed the rules a bit, than I was being a sort of beatnik, not working, with two kids at home.

How would you say your engineering background inspired your writing?  Do you regret not jumping into the “fold” earlier, so to speak, or are you glad you had a lot of time to find your path?

It was actually really great to get submerged in a completely non-literary world.  There was a specialized language, and moral system, in that world, which, I’d say, honed my idea of what “beautiful” language might be.  Plus it gave me a kind of special access to certain environments: Kodak Park in Rochester, for example.  But also of course, special access to certain psychological environments: the crushing boredom that must be endured because you have a beloved little family at home to support; being the low man on a very small humiliating totem pole, etc etc; coming to understand that the cliché of the corporate bad guy was just that: a cliché.  I got to know some people in big corporations who were both really nice people and in positions where they occasionally did some questionable things (which didn’t seem questionable to them, necessarily, but expedient/in service of a bigger cause, etc). So I guess I’m saying that it was eye-opening to have your easy, first dream denied you, and to find yourself living, workwise, in what would have been, even a few years earlier, a nightmare – and then find that you could do it, and it would yield amazing insights and all sorts of odd tonalities of beauty.

Did it take agents/editors a long time to come around to your writing or did you have some major supporters early on?

I got a lot of great support from Tobias Wolff and Douglas Unger at Syracuse, for the work I applied with. Then I went off the tracks for about six years and wrote in a sort of plodding, literal, realist-imitative way that was not natural for me. Once I pulled my head out, everything started working out, almost immediately: I got a story in a couple of journals, then The New Yorker and Harper’s. So my experience of it (and I know this is far from universal) was that, when I did work that I felt was good, the system pretty much agreed with me. So I’ve never put too much stock in the “have to have a contact” view of the publishing business. My sense is that there are a lot of people out there really hungry for good work. But, as I say, I know writers who feel this isn’t the case.

Your style is so specifically yours at this point — I’ve read interviews with other writers where they talk about how sometimes they find themselves trying so hard to imitate you and coming up empty — do you feel like your style has evolved dramatically in the years since you first tried to write a story?  In other words, was “honing your style” a process of its own?

Hoo boy, yes.  And it’s ongoing.  This kind of relates to the earlier question – tech writing made me get really tough on myself, just in terms of taking the prose down to basics, eliminating the lazily habitual “literary,” etc., etc.  Originally I was very much in the Hemingway/Carver camp, but, to do this, I was tamping down a natural tendency towards the funny, and/or the sci-fi.  When I stopped doing this, it felt like a real breakthrough. It felt more authentic, albeit a little disappointing.  It was sort of like I’d been going around picturing myself as looking like, say, Brad Pitt, and then had the misfortune of encountering a mirror.  On the other hand, there it was, you know?  My little story might not be Carver, but at least it felt like it was mine.

But I think this question of style is interesting and complicated.  It seems to me, now, that the tricky part is to always be trying to write on the crest of your own personal wave – that is, at any given moment, certain styles are going to seem more urgent and truthful.  So the trick is not to get fossilized in something you’ve already done, out of some sense of allegiance to “your” style.

I recently heard an interview with Ben Stiller where he talks about his long-ass trek towards turning CivilWarLand in Bad Decline into a film… what’s that process been like for you?

It’s been…long-assed.   But fun.  I think the project may be a bit dead in the water at this point, but it was fun anyway.  Ben is a nice guy and a terrific editor.  I learned a lot from him about structure, and about what is cinematic and what isn’t.  Through this project and a couple others I’ve been involved with, I’ve also had a nice chance to see the inner workings of that Hollywood world, which was interesting and not irrelevant, I think, to someone trying to understand American culture: this big storytelling machine, that employs some of the most talented/beautiful/energetic people in the world, and has complicated financial/corporate constraints, but still manages, sometimes, to make something wonderful and yet, on the other hand, is pretty much totally misrepresenting life on earth, except when it isn’t.

What do you tell your students about trying to make a living as a writer?  Any immediate advice?

Well, this is sort of old-fartish advice – that is, the type of advice someone who already has a tenure-track job would give—but I do mean it: I think the only defensible position is to sort of say to hell with making a living and put all your energy into making something new, that seems beautiful to you – that is, to try your best to push your work into a new/iconic place and let the chips fall where they may.  Otherwise you’re putting the cart before the horse, and it’s very possible that the emphasis on making a living (or being viable, or commercial, etc etc) might cause you to miss a vital path – to be, that is, both (a) lame and (b) unpublished.

And then another thing that I think bears mentioning is that writing is a great, wonderful vocation even if nothing comes of it, or comes of it four books after you want it to come, or comes smaller than you wished for – like anything worth doing, it refuses to be controlled, so puts you in the position of watching it closely, being humble, resilient, and all of that.