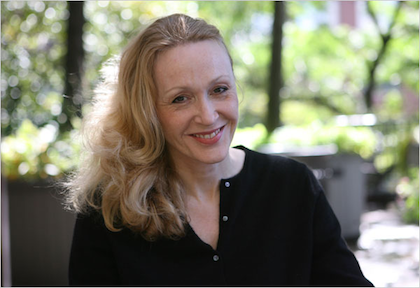 Jan Maxwell is an award-winning actress living in New York City. She has performed in countless productions, including the first Broadway revival of The Sound of Music, the Tony-award winning production Dancing at Lughnasa, her Tony-nominated role in The Royal Family, and her Drama Desk Award-Winning role in Chitty Chitty Bang Bang. She was also nominated for the Drama Desk Award for Howard Barker’s Scenes from an Execution, and won a Tony for her very scarily brilliant work in Coram Boy.

She is currently starring in the Stanley Tucci-directed Lend Me a Tenor on Broadway, for which she was nominated for another Tony award. She just attended those awards last night, in fact! We saw her on TV.

Tell me about your undergraduate experience? Were you already set on becoming an actress?

I had gone to school in a little town in Minnesota and then I transferred to go to the University of Utah, because I thought I wanted to be a dancer. I was ignorant and didn’t realize you don’t start dancing when you’re 18 and expect to be good at it. There was just one dance company where I was growing up. I went there and then came back home [to finish college] and I wasn’t really scholastically “aware” about what I was taking to tell you the truth – I was so stupid. I just took all these electives.

But then my counselor dragged me in my junior year and said, “You have to take these classes, these [prerequisities],” like required classes, and I said, “Well, what was high school for?” And then the next semester, I was [doing really well] in this English class, and my advisor took me into his office and said, “You’ve taken this class before” and I was like, “I have?” I just thought I was a genius! I was doing so well in it. But I had actually taken an English requisite twice. By the time I figured it out I was two quarters in. And I said, “I’m not taking this last class.”

So you left school?

That last English class was going to put me over the edge for job opportunities. Coming from North Dakota and not knowing that the word Juilliard existed – I didn’t think it [acting], could be a vocation. So when I realized you could [make it a vocation], I pretty much moved to the city blind. A friend of mine was here and he found me an apartment on the Upper West Side.

What was that like for you? Making the sudden move to the city after living in Minnesota and North Dakota?

It was pretty much a culture shock, but we got jobs wherever we could. I lucked out and got a job with the The Paper Bag Players [children’s theatre company]. They hired me and I stayed with them on and off for a few years. They took me all over the world, actually. Taiwan and Hong Kong and Alaska – we went all over the place. It was a great experience performing for kids because they’re so honest. It loosened me up as an actress – I was a bit stiff coming out of college.

Did you have to work more menial jobs as well?

I certainly did my share of hostessing at restaurants because, honestly, they didn’t want me on the floor. I was a pretty awful waitress; I couldn’t figure out why people didn’t just go get things for themselves! I also wrote up index cards at a law firm, things like that.

Did you have a few friends in the city from back home?

Lots of my college friends moved out here and we partied a lot the first few years. But we were scared – we had no contacts, nothing.

So what did you do to find acting work?

Went to open calls, got Backstage. Some people got frustrated and left. But I knew I loved the city and wanted to stick it out. At one point, when I was in a dire situation, I went to the Actor’s Fund and they helped me pay my rent.

What would you consider your “break” in terms of acting work?

In 1990, December, I auditioned for [the musical] City of Angels. And I remember 6 months before that I’d said if I can’t get a job I’m going to leave and move to Seattle. You know, I just decided that I’d given it 10 years and that was enough.

Well, I loved [New York] City – I had never ever decided to leave before and it was very hard on me. But I realized I wasn’t really concentrating too hard, and my soul was suffering from that – my acting soul. And I’d worked out in Seattle before for a [regional] show and really liked it.

But then, this is a true story: I got a fortune cookie and it said, “When winter arrives – good fortune will rain upon you.” And on December 21st – Winter Solstice – I got the call that I was going to be an understudy on Broadway. I remember going out and buying a dress.

No, literally I had no clothes. I needed it.

Did things get more comfortable after that first Broadway job came around?

I don’t know if things got “comfortable” after that. After City of Angels I came back, auditioned for Dancing at Lughnasa and was cast in that. I really have to credit these British directors who just go by auditions and not just by celebrity “names.” I worked a lot with British directors in those years, it was kind of this great discovery for me – getting to work and audition for the Brits.

Did you ever question your career as an actress? Wonder if there was anything else you could be doing?

This sounds really hokey, but a part of me believes that I don’t have any other talents whatsoever. It was in The Red Shoes, where they ask the girl: “Why do you dance?” and she says, “Why do you breathe?” It’s just something I had to do – it’s a passion of mine and I had to persevere.

Do you feel comfortable in your career at this point?

I think unfortunately we’re never comfortable – but I think that keeps us good actors. I think we should always be a little hungry. Because if you think you’ve arrived and you think you’ve done it all, you couldn’t be more wrong. We all learn from every experience, but I know that when I’m doing Howard Barker I’m the happiest. He writes ballsy women and he doesn’t shy away from them not being likable. You’re playing a female part like it’s a male part – its just a huge delicious meal to chew.

Anything you’ve learned on your way that you can impart to young actors?

I realized I should respect everyone – but revere no one. When you walk into a room to audition – that room is yours. I’d have to tell myself that they’d be lucky to have me, and not walk in there with my hat in my hands. Come into the room and give my best game and not think that it’s bigger than it is – if this one doesn’t come through another one will.

Photo by Sara Krulwich from the NY Times

This entry was posted in Actors and tagged "Chitty Chitty Bang Bang", "Coram Boy", "Dancing at Lughnasa", "Lend Me a Tenor", "Scenes from an Execution", "The Royal Family", "The Sound of Music", Drama Desk Award, Jan Maxwell, Tony Award. Bookmark the permalink.

One Response to Jan Maxwell