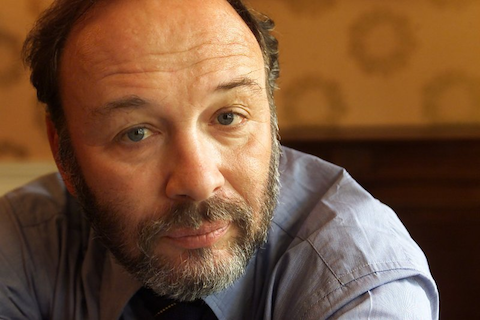 Joe Klein is a senior writer on national and international affairs for Time magazine. In addition to Time, Klein has contributed to The New Yorker, The New York Times, The Washington Post, LIFE, The New Republic, and Newsweek, among others. He was a political columnist for New York magazine, and served as Washington bureau chief and contributing editor for Rolling Stone in the late 1970s. He has authored numerous books, including Politics Lost, and The Natural: The Misunderstood Presidency of Bill Clinton.

In addition, Klein wrote the best-selling novel Primary Colors (1996), which he published anonymously, about the presidential campaign of a charismatic Southern governor, largely believed to be based on Clinton.  Mike Nichols directed the film version two years later.

Klein lives in Westchester, NY, with his wife Victoria. He is the father of four grown children, and enjoys wearing Polo shirts under blazers.

Did you always want to be a writer?

Yeah, I think I always wanted to be a writer. I was always a big reader. From the moment I read Huckleberry Finn, I saw the potential for reading and then writing to take you someplace else. Huckleberry Finn is about a kid who escapes his claustrophobic family situation and gets on a raft with a guy who is completely the opposite of him…in many ways that book really set the tone for my life. The problem was: I didn’t think I’d be good enough. You know? Like, who’s good enough to be a writer?

When I graduated from college, I was married, and I had a son, so there wasn’t much margin for error. So I spent a year doing PR in New York. But it was the sixties, and you couldn’t do PR in New York in the sixties, for the printing industry. So I quit and went to grad school in journalism at Boston University. I got a job working for a small newspaper north of Boston—the Beverly Times. My first job was to do the police blotter…and I had these two Dickensian editors, Cutting and Shearer, and I realized in about three weeks that you didn’t actually need to go to school for journalism, that you could just do it…so I started writing, started reporting, and never looked back. Journalism isn’t exactly brain surgery—either you have the skills or you don’t. You can teach people the ground rules of journalism, and you can teach them something about writing, but I think writing is kind of innate. Either you got the gene or you don’t.

Were you able to support yourself as a journalist?

I was making all of $95 a week at the time, and I was able to support my family, and I had some money saved up. But then something else happened. I was in the middle of a riot in Cambridge, in 1970, during the Cambodia incursion, around the time the kids were killed at Kent State. I was dodging tear gas when I ran into this guy named Teddy Gross, who was the editor of a publication called Boston After Dark. I told him what I did and he said, “Wanna try writing something for us?” I did, and they liked it, so that set me off on another career path where I left the world of straight journalism and went into what was then the underground press, where there was a lot more freedom…the underground press was really where I fit. So I went to work for the Cambridge Phoenix, which then became the Real Paper. Although I did take a one-year detour into television—I went to work for WGBH, the local educational station…but ultimately I was a writer, and I wanted to get back to writing.

$95/week wasn’t exactly a luxurious payroll. What kind of things did you have to do to survive on a low budget?

We were just above the poverty level, and we had a kid. My parents, I’m sure, although I don’t remember it specifically, made sure that their grandson was never gonna go hungry. So we were okay. We lived in a nice apartment in Cambridge; it wasn’t a tremendous struggle. And then I had money saved up. I guess it was from my Bar Mitzvah. And at a certain point I made a real leap: I left television and went to work for the Real Paper. It was really an incredible story: the entire staff of the Cambridge Phoenix, which became the Real Paper, went on strike because the owner fired a beloved editor, whose name was Harper Barnes. Then the owner sold the Cambridge Phoenix to Boston After Dark, which then became the Boston Phoenix, and the staff said, “You can sell the name but you can’t sell us, we’re still the Real Paper.” And it was a great experience because we elected a publisher, we elected an editor, and then we voted on a salary structure. Those of us on the editorial side didn’t make anything for about six months; we were just working for free, and on faith. But we did extremely well. By six months in I was making $130 a week, which was pretty fabulous.

Did your parents approve of your decision to be a writer?

They knew they had limited control over me. At one point my dad, who he was reading a book where one of the main characters was a writer, said to me, “You’re just like this guy, and I think that’s where you’re going with your life.” I don’t think he was too pleased about it. He was certainly not pleased when I left television to work for nothing. But it began a pattern in my life where I would take chances, for artistic reasons, or to broaden myself. And certainly writing Primary Colors, writing a novel anonymously, was taking a big chance. But I also found that doing any one thing for four or five years in a row got to be kind of stultifying, so I would change the kind of writing I would do every four or five years. And I changed the place where I would do it. And I think it began with that experience. I’ve never had a move that was completely disastrous. There were some moves I made that were ultimately wrong, but no killers. And there were some that were just fabulous.

What was it like moving from writing articles to writing books?

I was at Rolling Stone, I was a staff writer there, and I had never written a music piece. I did a piece in Ohio about a worker at a poly-vinyl chloride plant, who was dying of cancer that he’d gotten on the job…it was a really depressing story to write. And when it was over, I went back to the office, and Dave Marsh, who was a music writer, said to me, “You’ve been here five years and you’ve never written a music piece…why don’t you do Springsteen?” And Marsh said he was gonna do a piece about Arlo Guthrie…and our boss said, “No, Joe is going to do Arlo Guthrie.” So I did the piece on Arlo Guthrie, where he took the opportunity to announce to his mom, through me, that he had converted to Catholicism from being Jewish. He and I really got along well…Arlo’s agent, who had also been his father Woodie’s agent, a guy named Harold Leventhal, came to me and said, “We’re looking for someone who can write a biography of Woodie.” So I went to Woodie’s widow, Marjorie, and I said, “If I do this, you have to give me total freedom,” and she said, “You’re absolutely right.” I spent a year doing research, and that was one of the purest experiences of my life as a writer, because everything worked out exactly the way I had planned it…aside from the fact that the book didn’t sell a lick—it’s still in print, thirty years later, and it took me until five or six years ago to get the American royalties. Books will break your heart, but that was a fabulous experience.

When did you start writing fiction? And why did you choose to write anonymously?

The transition to fiction came about in a very interesting way. It was the mid-eighties, and I was working freelance, and I hated it. It was terrible. I was a very successful freelancer. But you could never tell when the next job was coming. Sometimes you’d be overworked, sometimes you’d be underworked, so I figured I’d do something outrageous and lucrative by doing an “As Told To” book. And the subject was Ted Turner. I found that I could absolutely throw his voice—I could mimic him perfectly…but Turner hated it, and the book never happened. But that was the next thing to fiction writing. And so a couple of years into the Clinton administration, a friend of mine said to me, “You know, these people are a novel.” And I decided to try and see if I could throw a voice. I invented a character who was part me, part George Stephanopolous, and part this black guy Bill Morton…and I started writing, and it just happened, and it was out of my control…that was the most exhilarating experience of my life, because I never knew what was going to happen next. Characters just went off on their own. I once told Clinton about the character who was based on him, Jack Stanton, that the gimmick of the book was that Jack Stanton was gonna lose, but he just wouldn’t.

As for writing it anonymously, my first thought was, Victoria [Klein’s wife] and I read a lot of nineteenth century British fiction, and Jane Austen never put her name on anything…and I thought that was kind of fun. And also, a journalist writing fiction is the world’s oldest cliché. And I didn’t want to make a fool of myself publicly. And I thought, if my name was on it, then my relationship with Clinton would be what was written about instead of the value of the book itself. I wanted to see what people actually thought of this book.

What was it like achieving such success with an anonymous novel?

That was one of the more saintly experiences in my life, because if I had been able to take credit for Primary Colors, I would have been really obnoxious. All of my friends would have hated me. And not being able to talk about it at all meant that I could be a very nice person. It was a very quiet space to be in. It was a heavy load to carry at a certain point, because I hated lying to most of my friends, because I couldn’t burden them with the secret.

Do you find it difficult to separate work from life?

Of course. Writing doesn’t end, journalism doesn’t end: you’re doing it all the time. I find myself waking up in the middle of the night with an idea. I can’t put it away when I’m home with the family, which pisses off the family some, but it’s what it’s gotta be. You can’t control when a good idea is gonna come, or when a good sentence is gonna come.

Do you have any advice for young writers or young journalists?