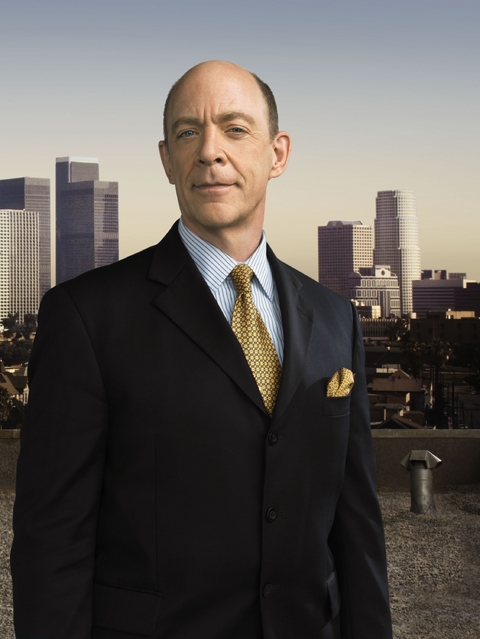 JK Simmons gets all the coolest jobs. A working actor/singer on and off Broadway into the early 90’s, he moved to the screen to try his luck at movies. Since then, he has appeared in over a hundred films and TV shows alongside some of the most well-respected names in the business, and has made a name for himself as a versatile and iconic character in a full spectrum of genres.

You’ve seen Simmons on the big screen in Juno, Up in the Air, I Love You Man, Burn After Reading, For the Love of the Game, and Spiderman (to name just a few). He also appears in The Music Never Stopped, an independent film by Jim Kohlberg released at Sundance this spring. He has enjoyed an eclectic TV career, ranging from his role as Assistant Chief Will Pope in The Closer and neo-Nazi Vern Shillinger in HBO’s Oz to parts on The Simpsons and Party Down. Oh, and he’s the voice of the yellow M&M.

Simmons graduated from the University of Montana where he acted, sang, and composed, then went on to attend Ohio State University before acting in New York, Seattle, and Bigfork, Montana at the Bigfork Summer Playhouse. He currently lives in L.A. with his wife, the director Michelle Schumacher, and his two children, whom he describes as “adorable.”

You’ve had a pretty cool acting career in film and TV – was this your plan all along?

I was completely uncalculated – just going from one thing to the next because it’s what I liked to do. I started out in New York, waited tables for a year and then started finally getting a couple of jobs; one thing just led to another. But the media was such a different world then, I was doing nothing but theater for the first twenty years.

And theater was just a natural inclination?

I sort of stumbled into doing summer stock in Bigfork (Montana) and I thought, “Well this is really cool. It’d be great to be able to do this for a living, and maybe I’ll teach school nine months a year and do summer stock for the rest of my life.” And then I decided that I hated teaching so, I decided to try and act full time. But it was really such an incredibly gradual climb from 60 bucks a week doing musicals in Montana to you know, giant budget movies in L.A., and it was a series of serendipitous meetings with everybody from Don Thompson [Bigfork Playhouse manager] to Sam Raimi.

So what happened? What changed?

Well, I was lucky enough to meet a few different casting directors in New York when I was doing theater there. They got me doing some regional stuff, and then I started doing some Broadway casting and this and that. And then I was doing my fifth Broadway show in a row and obviously doing okay, but, living in New York, all I was doing was paying the rent. So I told my agent, “Once this show is up and running, I don’t want to look for another play, I’d like to get the TV and movie thing going.” Got a couple of auditions, and one of them turned out to be a thing that lead to a big guest spot on Homicide, which six months later led to Oz. And suddenly I was in the middle of a pretty big transition.

And you never went back to the theater?

The occasional benefit here and there. But…wow, I haven’t done a run of a play or musical since before my first kid was born, in like ’95. Once I segued into camera work and actually got used to making money, I moved to L.A. and bought a big house with a swimming pool. [Laughs.]

The other thing was, when my kids were little, I never wanted to do a play because you’re never home to tuck your kids in at night. A lot of it was a lifestyle choice, and, also, I was just lucky.

Did it all come down to luck?

Ultimately it had to. Being in the appropriate place at the right time. But I mean, I shouldn’t minimize all this and say I’ve only been lucky, because I’ve been paying attention and learning by doing ever since Bigfork. I’ve been ready for every opportunity I’ve had, and I know that I wouldn’t have been ready for a lot of these opportunities if they had come along earlier. I mean, if I’d gotten lucky enough to be on Oz when I was 22 years old, like some of those guys were, I would have been way in over my head and I would have drowned, and that would have been it. So really, because I spent so long doing theater, doing regional theater, gathering experience, I got time to gradually grow into this great fat bald character. [Laughs.]

Any plans to branch out from acting?

I’ve always been happy staying in a pretty limited scope – probably because I started out in theater, and I naturally focused on what I enjoyed and… And frankly because I’m pretty lazy. For me, just bringing my limited perspective as an actor is enough. All I have to worry about is, depending on the nature of the project, what’s on the page and how to make my character real and not screw it up. Beyond that, I mean, there are unpaid PA’s getting people coffee who know a hell of a lot more about making movies than I do. I literally don’t know what they’re talking about: what lens to use, all that. I still don’t know what they’re talking about.

I mean, I have “friends” in the business at this point, I suppose. But, really, I’m the least connected guy I know. I suppose if I spent more time doing self-promotion, I’d be further along than I am and higher up… I mean, right now we’re trying to get some star cameos for a recurring gag in a movie my wife is producing, and I’ve called a few guys I’ve worked with to fill the spot. And at this point, I’ve worked with big, sticky movie stars, and had a great time hanging out on the set, but I’ve never felt comfortable sitting there with Tom Hanks or Brad Pitt and going like, “Hey, gimme your number and I’ll text you, we can hang out sometime.”

Yeah, I guess that’s tough to do gracefully.

Plus, frankly, I’d rather be hanging out with my kids anyway. And my wife tells me, “Come on, you’ve worked with half the movie stars in L.A., and we’re just looking for that one higher-caliber… you know…” Actually, now that I think of it, Tom Hanks probably would be someone I could call… He’s a nice enough guy.

What kind of advice did you get going into acting, and what would you pass along?

I got two pieces of advice from two different professors when I was getting ready to graduate college, and, keep in mind, I was doing musicals at the time. I was composing and I was conducting and I was going to maybe teach or be an opera singer; I had all these different areas and interests, but I was just doing them because I loved doing them. And one professor said, “You gotta pick one of these. You have to pick one discipline and really focus on it, because you have some talent and you could have a career, but you need to get more specific.” And then another professor who I really respected said the exact opposite, “Just keep doing what you love and your direction will find itself.” And if there’s anything I can say, it’s that the latter is true. Do what you love and the rest works out, because if you’re doing it for the right reasons, then the work is its own reward.

Though, obviously, if you just wanna get rich and famous, [laughs] good luck with that.

This entry was posted in Actors and tagged "Burn After Reading", "For the Love of the Game", "I Love You Man", "Juno", "Oz", "Spiderman", "The Closer", "The Music Never Stops", "Up in the Air", Bigfork Summer Playhouse, JK Simmons, Kenneth Grinde, Michelle Shumacher, Tom Hanks. Bookmark the permalink.