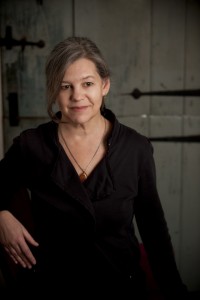 Jo Ann Beard achieved cult status among a whole generation of young writers with her essay collection The Boys of My Youth, which came out in 1999. Her avid fans had to wait a long time for the next book, In Zanesville, a novel, which was published in April, 2011. In the meantime, her essays were widely anthologized in collections like The Best American Essays and the Touchstone Anthology of Contemporary Creative Nonfiction: Work From 1970 to the Present (2007). Her work has also appeared in The New Yorker, Tin House, The Iowa Review, and O, The Oprah Magazine.

Beard was the recipient of a 1997 Whiting Foundation Award and a 2005 Guggenheim Fellowship. She earned a BFA and an MFA from the University of Iowa and currently teaches writing at Sarah Lawrence College.

Susannah Meadows for The New York Times recently wrote of Beard, she “has a knack for melding the funny and the sad, amplifying small moments into something big.”

When did you first realize you wanted to write?

I discovered writing in my early 30s, as I was finishing my undergraduate degree in art. A fiction class I took on a whim was what did it. Though recently when I was visiting an old friend, she dug into her closet and pulled out a flannel bag filled with notes and letters from me, beginning in seventh grade and ending when email was invented. Each one was like a little essay, what can I say. The bag itself had leopard spots and matched a sleeping bag my friend used to bring to sleepovers; I remembered it a lot more clearly than I remembered the person who had written all those notes in class and all those Selectric Typewriter letters from whatever office she/I was pretending to work in.

Were you a big reader early on? What did you read?

I read everything, and by that I mean: everything. Favorites were Charles Dickens, Albert Payson Terhune, and Mary O’Hara. Dogs, horses, and distressed children.

How did your family and friends feel about your decision to pursue life as a writer?

Nobody thought anything, because pursue wasn’t really the right word. There was nothing for other people to notice: I went to work every morning and after work I did other things. Writing just became one of the other things; it was like building model ships. I wrote stories and set them on my mental mantel.

Writing isn’t exactly a stable career path. Did you or do you feel pressure to do something more “practical?”

I have always been practical, though I don’t particularly believe in it. I was raised by people who cared a lot about certain things and not much about others. They cared that you got good grades in school so you could get a good job in an office. What they didn’t care for was anything that took you away from home for too long. Like a road trip, say, or college.

When you say you’ve always been practical, how did that manifest itself in your life choices?

By being practical, I mean I always had a day job, so it didn’t matter if writing paid off in a monetary way. (It doesn’t.) And I don’t make life choices, I operate more short-term than that. I never chose to be a painter or a writer; those things chose me, and then, in the case of painting, unchose me.

How did you go about becoming a “writer?” Early writings?

The first story I wrote was set in a post-apocalyptic Iowa City, about having to put your dogs to sleep because you don’t want them to be left roaming the smoking ruins after you have succumbed to radiation sickness. (It was the 80s.) It had King Tut in it, and cavemen. The second was about a very wealthy little girl who poisons her grandparents by putting pesticides in their pudding. It had lions in it.

You can understand that I didn’t publish for quite a long while.

What was the first thing you published, and what did it feel like to see your words in print?

It felt great to see my work in print, transformative. It was an essay about a trip I had taken, but it was published as fiction because it appeared in a journal called Story.

When did you first identify yourself as a writer? Did you have a sense of what a “writer” was?

I guess I first thought of myself as a writer when I got a rejection slip. That was a defining moment—meeting such a worthy adversary.

What kinds of jobs did you have to support yourself?

Secretary and glorified secretary. For a while in my early forties I had a job stapling. It was actually fun but then it started bothering my back.

Any good story from one of those jobs?

I worked once for a woman who was younger than me; she had me doing things like bringing her bagels and guarding her car when it was illegally parked. I liked her quite a lot and liked the job too, mainly because I could smoke while I guarded the car. Then she ran across a piece I had published in The New Yorker and almost had a coronary. She couldn’t adjust her idea of who this person she saw every day was. It’s like a box of paperclips had started talking to her. She just kept staring at me all day, and her friends kept coming by and laughing at her. To them this was high hilarity, that their colleague had underestimated her box of paperclips. At the end of the day she called me into her office and said: “You don’t know it, but The New Yorker is a big deal.”

I might be making it sound bad, but it was actually pretty great, all of it. The cigarettes, sitting on a fire hydrant in the sunshine, this woman’s genuine desire to let me in on my good fortune.

What was the living like? Did you have roommates? What would have been on a grocery list from that time?

For a while my husband was my roommate, also various other people who slept on our sofa. I ate candy and vegetables. My grocery list always included a carton of cigarettes. Then for a while I was my only roommate, though there have always been dogs.

How do you look back on that time—fondly, or not so much?

Is there anything you would like to tell Jo Ann of that earlier time?

I would tell her that the rejection letters were actually doing her a favor.

Can you recall early challenges you faced, writerly or otherwise?

Just the ongoing challenge of having been raised in a culture where keeping your head down is valued more than it should be.

I am Swedish, and Swedish culture is all about keeping your head down, not sticking out too much, so I can sympathize. Would you tell me more about what this meant to you, personally?

Well, not liking attention is difficult when you are at the same time writing books and asking people not just to buy them, but to sit for hours and maybe days with your voice and your ideas in their heads. So there are contradictory impulses going on.

Mostly I would say that when you have always been a sidekick or background kind of person, you are attracted to and in turn attract people who like to have sidekicks and background people close to them. Just because you decide you want to change your role in life, it doesn’t necessarily mean they want to change theirs. Thus, divorce. Thus, loss of sustaining friendships.

What about early triumphs?

For me, facing triumph would be a challenge. Please see keeping your head down, above.

Many writers say that they find writing a very painful process. Do you find the actual act of writing enjoyable?

I’ve always been recalcitrant where writing habits were concerned. In terms of my other work, what I do for pay, I’m conscientious and actually enjoy working, making stacks of things and lists, and then watching them diminish and get crossed off. But writing is much more difficult, and therefore worth avoiding, so I go to great lengths to do so.

When I finally sit down, I spend a lot of time trying to sink down into the dream of it and then stay there. It’s like walking on the bottom of the ocean, all these incredible creatures float past, neon and scary, so absorbing, but the surface is always calling.

Did you have many friends who were writers?

I lived in Iowa City, where standing in line for ice cream is like being at a PEN dinner.

Did being around so many writers create a sense that you had to hurry, get on with it, publish or perish? Or was it an enriching thing?

I feel inspired by artists, I like the way they think and the way they don’t think. It was sustaining and stimulating to live in a community where you can go to a reading every single night. Sinking down to the bottom of someone else’s ocean, watching their fish for a while.

Do you feel life as a writer gets lonely?

Not the way I do it, which is to talk on the phone during my writing time.

In The Boys of my Youth, there are in fact many phone conversations that go on, with your best friend or cousin, running through old experiences as you write about them. Does talking on the phone take the “edge” off? You’re not completely facing the white page alone if there’s someone speaking into you ear at the same time…

It’s true what they say, that everyone dies alone, and it’s also true that every writer faces the white page alone. In the end, nobody can help you, it’s your path, your valley of the shadow, and you have to walk it alone. That said, people can hold your hand, and talk to you on the phone right up to a certain point.

You teach now. Is it difficult to teach and write at the same time?

Well, I’m a person who stapled for a living, so I’m not in a position to complain about teaching. And most times it’s just exactly what I want—to help others refine their writing and their understanding of literature.

Other times, I miss doing my own work and want to wring their necks. There, I said it.

Any advice you would give to writers just starting out?

Understand that you will always be just starting out.

Photo by Jennifer May Lores

This entry was posted in Writers and tagged "Best American Essays", Astri von Arbin Ahlander, In Zanesville, Jo Anne Beard, The Boys of My Youth, The Fourth State of Matter. Bookmark the permalink.