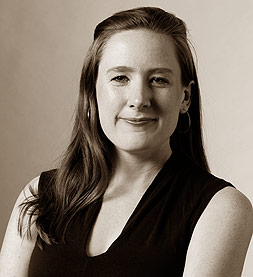 Her plays have been seen in almost every major city in America, at places like the Lincoln Center Theater, Goodman Theatre, Playwrights Horizons, Second Stage, Arena Stage, Woolly Mammoth Theatre Company, Yale Repertory Theatre, Berkeley Repertory Theatre, Cornerstone Theater, The Wilma Theater, Madison Repertory Theatre, and the Piven Theatre, among others. They have also been produced internationally, translated into Polish, Russian, Spanish, Norwegian, Korean, German, and Arabic. Originally from Chicago, Ms. Ruhl received her MFA from Brown University where she studied with Paula Vogel. In 2003, she was the recipient of the Helen Merrill Emerging Playwrights Award and the Whiting Writers’ Award. She is a member of 13P and New Dramatists and won the MacArthur Fellowship in 2006. She is a recent recipient of the PEN Center Award for a mid-career playwright.

Her newest play, Stage Kiss, is currently running at the Goodman Theatre in Chicago.

Since before I could write I wanted to be a writer. I know that’s a little strange, but there it is.

Who were the writers you most admired when you were growing up?

You were going to be a poet when you started college. What made you decide to switch your focus to playwriting?

I majored in creative writing with a focus on playwriting. Before I met Paula Vogel I thought I would be a poet and some kind of scholar to support my poetry habit. It was Paula’s belief in me that made it seem possible to make a life as a playwright. Paula sneaked my first play, Passion Play, into the New Plays Festival at Trinity Repertory Theater and it was that performance that turned me into a playwright. I got into a car accident on the way there, blacked out, arrived, saw Passion Play, and thought, “This is what I want to do with my life.” Perhaps it never really happened. Perhaps my whole life has been a dream since that car accident.

Was your family supportive of you pursuing a career in the arts?

Yes! I couldn’t have had a more supportive family. I can only imagine that they would have been less supportive had I gone into some responsible profession. My mom is an actress and has always supported me being a writer; my father died before I started writing plays, but always supported my grand ideas of becoming a writer. Though he cautioned me about having a solipsistic writer’s life—a professional hazard or bugbear—and wanted me to teach as well as write for that reason.

When you graduated from college, what was your first move?

I moved back to Evanston, where my family lives and I worked for Americorps in the public schools, went to writer’s colonies, and did a play with the Piven Theater Workshop.

Before you were able to support yourself wholly in the theatre, what kind of jobs did you have?

Oh, God. There were so many. I remember at tax time I would have about a million W9s. Berlitz language school was one. Reading plays for theaters was one, which I enjoyed. Teaching in the public schools was one, I loved that job, I would do it forever, working for Teachers and Writers and Young Playwrights Inc. in New York teaching poetry and playwriting to very young kids. I did research for a book on public parks for a non-for-profit. I was a “lady reader” for a very old man. I was a model for figure drawing classes. I taught a writer’s group for developmentally delayed adults in Pawtucket, a job I wish I could have had forever. I worked at a bookstore.

Where did you live?

I loved living in New York in my early twenties. I saw all the plays I could possibly see. I saw my favorite writers read at the 92nd Street Y. I thought up Eurydice while I was walking down the street to my apartment on 125th Street. It was romantic. And delirious.

I made one thing over and over—cous cous. And I’d put chickpeas and feta cheese on top. Now I can’t look at cous cous or feta cheese. I would get a quart of hot and sour soup and brown rice which was $1.75 and eat it for two meals. Café Con Leche in my neighborhood was under a dollar and beans and rice was maybe another dollar. My friends with real jobs used to take me out to eat occasionally and I would want to weep with gratitude. I remember a fellow playwright who had a job then taking me out for Easter dinner and eating a roast chicken and wanting to cry with happiness.

How did you decide to go back to Brown to get your MFA?

I had always wanted to study at Brown for my MFA because I loved it there so much, but I’d been told to take some time off between undergraduate life and graduate life. It’s one of the only programs that’s free, and it also used to be one of the only programs where you were housed with the poets and the fiction writers, which I dearly wanted. I wanted to listen to the poets, steal all their secrets, and never tell them that I ever tried to write a poem for sheer embarrassment.

How has starting a family changed your creative process?

It means I don’t have a creative process unless I go out of the house. That’s the main thing. I don’t gaze out of windows for hours, I don’t smoke, I don’t dash off to Europe if I’m experiencing writer’s block. Instead, I change ten diapers before eleven a.m., dash out of the house, write for two hours, and dash back in time to pick up my four year old from school. It’s not romantic. But it’s wonderful. It requires planning.

Do you think of your work differently now that you know it will be seen and discussed by many people as opposed to when you were starting to find an audience?

Not really. I don’t think of audience when I’m sitting down to write a play. I think of the invisible world hovering somewhere beyond the desk. The other stuff is noise and chatter. Woolf has a great passage in Orlando that I wanted to put in my adaptation but I didn’t have room for, “all this chatter and praise, and blame and meeting people who admired one and meeting people who did not admire one was as ill suited as could be to the thing itself: a voice answering a voice.”

What advice would you offer to aspiring playwrights just starting out?

Study with Paula Vogel. Study with Mac Wellman. Read the playwrights you love and beg, borrow or steal to see their work. You can’t internalize the work until you’ve seen it. Join a writer’s group. Make up deadlines for each other. The playwright Andy Bragen and I used to make up deadlines and punishments for each other when I lived in New York in my early twenties. I hope he doesn’t mind my sharing that one time he didn’t meet his deadline and I punished him by renting Jane Fonda’s workout routine and making him do it while I watched in his east village apartment.

It’s a lonely life. Make friends with other playwrights. They are, after all, the best sort of people as they like to be alone and they also like to be with other people so they understand one’s predilection for eating lunch alone and panicking if there’s no living soul around at dinner.

Send out ten plays at a time and keep your rejection letters. They will be amusing later. Don’t despair if people don’t want to do your work early on. The literary managers who are now reading your work and love it but reject it because the artistic directors don’t like your work will be artistic directors in ten years. Take the long view. Try to help other people instead of despairing about your own artistic failures.