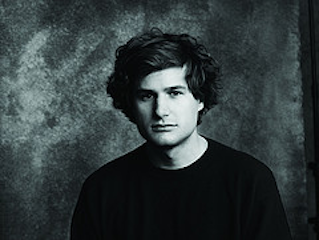 Carl von Arbin is a member of the indie band Shout Out Louds, for which he plays guitar and sings. Shout Out Louds have released a number of albums and EP’s since their start in 2002, including Howl Howl Gaff Gaff (2005), and Our Ill Wills (2007). Their latest album, Work, was released in February 2010. The New York Times called them a band “whose hook is sincerity,” and in the past decade they’ve toured with The Strokes, Secret Machines, and Kings of Leon, among others. Their songs have been lauded and remixed and danced to all over the world.

The band’s five members are from Stockholm, Sweden, but with all the touring they’ve hardly stayed there long enough to call it home. They’ve just spent the month of May shuttling between the American coasts and are now on their way back to the European continent to play the summer festival circuit. Between all the back and forthing, we got a hold of Carl who was generous enough to share with us some wisdom from his own salad days.

Carl is a master at charades. He is quite tall.

How did you get started with music?

We were twenty-three years old and really too old to “go for” the music thing. We were in the process of educating ourselves as filmmakers and graphic designers at different universities. The three of us— me, Ted [Malmoros], and Adam [Olenius]— got together and decided to start a project. More to have something to do once a week, like a hobby. Ted had never even held an instrument before, so it was really more about the idea of creating something together. We recorded a demo a few months after that, which is when Eric [Edman] and Bebban [Stenborg] entered the picture. After school, we all had various odd jobs without any clear direction and so we began to practice more and more and got some gigs to play with other bands we knew. You might say that since none of us had a solid job we sort of slipped increasingly into music. A friend of ours, Filip [Wilén], who had worked with music before, wanted to start a record label and wondered if we wanted to do something together. He released our first album [Howl Howl Gaff Gaff] in Sweden and still works with us today.

There was never some dramatic decision that we would put all our chips on the music thing, it was more of a gradual development. It probably helped that we sort of took off as quickly as we did. Since then we’ve just kept chugging along and not had clear goals, mostly just chosen a path as we stumbled upon it. But we’ve made sure to remain true to ourselves and our ideals. That has always been important.

The band’s latest album is called “Work,” can you tell me about that?

We came up with the title of the new album, Work, about a month after we finished recording it and began to listen to it in a more subjective way. We realized that this is what we do. We are 32 years old. This is what we have chosen in life. But maybe what it’s about even more is how it’s possible to completely lose yourself in the work that you do, in a romanticized, über-creative way. How you shut everything else out and live in that work. Finally, it’s also about “work,” as in “working out.” To make things work. Within the group. Dynamics, respect, getting along.

What kinds of jobs did you have to support yourself before the music career took off?

It took about 3-4 years before we could live on the music, which is what we still do today. I’ve worked a lot with graphic design on a freelance basis, but of course I’ve also done other jobs that were more about just making money. I was a driver for a courier service, a computer game developer, a nanny, a salesperson in a store, a DJ, a translator for manuals etc. Today, I still do some graphic design projects now and then. I do it to stay à jour, but also because it can be nice to disconnect from the music and the band.

Do you like having other jobs besides your music or does it distract you?

I think it’s difficult to combine. Like working with a graphic design project while on tour. There is a lot of time left over when you’re touring, but it’s incredibly difficult to find the energy, the desire to create, and the right frame of mind. You give everything you’ve got when you play, and the day after there is another gig. Touring goes in strange cycles. It’s just impossible to find the peace you need to work. But I do freelance work between tours/albums. If I don’t work at all, it’s easy for me to get depressed and lethargic.

I’ve found new hobbies that just swallow money, like long distance biking and wine. Other than that though, I think it’s pretty much the same as before: all my money goes to food in one way or another.

How did your family and friends feel about your choice to be a musician during the time before the band took off?

All our friends have always been supportive and come to our shows. I think they’re happy for our sakes that it’s working out. You have to work on relationships in order for them to work, though. Since I travel a lot, people always assume that I won’t be around. You have to take the initiative if you want the relationship to last. That can be hard sometimes. You get grouped together as “the band” and lose yourself a little in that, which can be both good and bad. The individual disappears.

No one expected that this music thing would become something bigger. Family and friends probably saw it as one more hobby-project that would die out and then we’d get back to the regular every-day of things.

We had played our final gig of the last album and were in São Paolo, Brazil. Totally spent and fed up with everything. A few of us had decided to stay longer and vacation, but it just felt like a drag. We talked and it felt like it was the end, that we didn’t have any more energy. That there wouldn’t be a third album. Now we’ve rested up. We’re back in shape.

Any advice to young musicians starting out and struggling to make it?

Someone gave us an interesting piece of advice in the beginning of our career, and it was: Say no to everything. Really what that means is knowing what you want. Everything is so accessible today, so you need to decide what is important to you and stick to that for as long as you can.

And then you have to say yes, it’s so wonderful to say yes. There is so much no in the world. It’s wonderful to give yourself up, to just throw yourself out there. It can lead you somewhere else, somewhere unexpected.

One Response to Carl von Arbin, Shout Out Louds