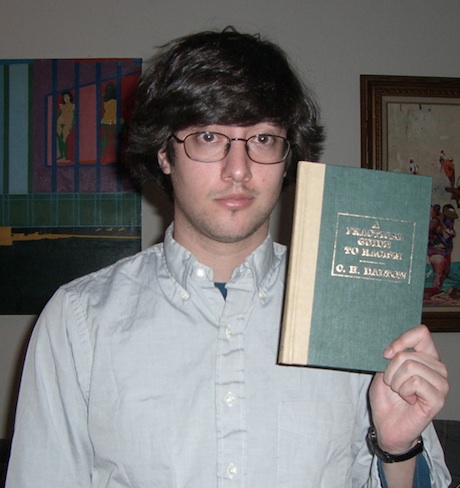 Sam Means is a writer for “The Daily Show” and a contributing cartoonist for The New Yorker. Before joining “The Daily Show” staff, he was a contributing writer for The Onion and “Saturday Night Live.” He holds an A.B from Dartmouth College and got his masters in philosophy from Kings College, Cambridge. Under the pseudonym, C.H Dalton, (who, according to the book’s website, was “born to a family of wealthy robber barons in New Haven, Connecticut”) he also authored the satirical book, A Practical Guide to Racism.

Means told us about his transition from philosophy to comedy (obvs) and what it’s like being the youngest writer on the most beloved comedy program on television.

You went to Dartmouth College – were you involved in comedy there to any degree?

When I got to Dartmouth, I considered myself more of a cartoonist than a writer, so I started in right off the bat doing a strip for the newspaper there. It was called “Dingus,” and it was about a lab chimp who got a perfect score on the SAT and went to college. Gold! That got kind of old after a while, but from there I transitioned into doing a weekly column, which was a lot of fun. Basically, I started comedy writing because drawing was too much work.

After Dartmouth did you have your “what the hell am I doing” phase or did you jump right into getting your masters in philosophy?

The masters was sort of to stave off that phase, I guess.  I’d been kind of obsessed with Cambridge philosophy for a while — Russell, Moore, Wittgenstein, and all that amazing history — so when I got accepted there I couldn’t really say ‘no.’

How did you transition (literally and mentally, I suppose) from studying philosophy into pursuing a comedy writing career?

It was a relatively smooth transition, I suppose. Long story short, I’d kept up with writing short humor pieces while I was in grad school, and an American friend of mine who’d read them turned out to be friends with some folks over at The Onion, so he helped me get a try-out there. When that worked out, I decided to move to New York after I got my Masters, rather than returning to England. I took it as a sign that I should give comedy a try professionally, since it’s what I loved doing in my free time, anyway.

The Onion was just a total fluke, but it wasn’t until my friend offered to put me in touch with them that I realized how badly I wanted to do something like that. Or, at least, how much more I wanted to do comedy than I did philosophy.

What kinds of humor pieces were you publishing while you were in grad school?

I don’t think I published anything while I was over there, but I was always working on short, “Shouts and Murmurs” [New Yorker weekly humor piece]-style pieces and cartoons, plus sketching out outlines for longer-form comics or weird art projects… Basically, the ramblings of a restless mind. I’m sure my notebooks looked like a serial killer’s around that time, because I had so few creative outlets.

What steps did you take to getting your writing seen by “SNL,” etc.?

That next year, I was just trying to get my work out there, wherever would have me; whatever crappy magazines or websites, whether they paid or not, and applying for whatever writing jobs I heard about. That led to a few decent gigs, like faxing to ‘Weekend Update’ [SNL segment] and working on a couple Comedy Central pilots that never got picked up. I was able to get by that year, but it was tough, and I did a lot of freelance illustrations for stuff like business textbooks to pay the rent.

Did those freelancing gigs transition into your job at “The Daily Show?” Was it a long process?

One of the pilots was a pretty high profile one out in LA, and through that I was able to get representation, which made it a lot easier to submit for TV jobs. After that, everything happened pretty quickly over the next few months. At the time, it seemed like an eternity, of course, but then I got really lucky and a few things opened up all at once.

Finding the right outlets to submit comedy writing to seems to be the toughest part. What steps did you take to stand out from the pile of submissions?

It’s tough without an agent. I definitely spent a lot of time trying to find contact info for places that bought humor writing or cartoons and sending them unsolicited submissions, or I’d hear about someone who had submitted for something and ask them for the info. In terms of standing out, most TV jobs will require you to write an original sample on demand, so it’s just a question of rising to the occasion and writing a killer packet. Which is nerve-wracking, obviously, but it’s also kind of cool to basically be on an even footing with much more veteran folks, because it’s all about the quality of your writing.

You’re one of the younger writers on “The Daily Show” staff. Was there a steep learning curve when you first arrived, or did you feel comfortable immediately?

I was actually the youngest writer by almost 5 years when I got hired, and was for a long time, but I don’t recall having many issues at the start. I was a bit starry-eyed, I’m sure, but I just kept my head down and worked my ass off that first year. It helps that the folks there are grown-ups — it’s not one of those rooms where everyone is slagging on each other or pulling pranks, which I really appreciate. It’s all about putting out the best possible show.

You wrote a book under a pseudonym – was this for comedic reasons or more personal reasons?

Purely comedic. A Practical Guide to Racism is written in such a strongly-voiced character, it seemed weird to suggest it was anything but. It made it kind of complicated to promote, though. I think my publisher probably regrets letting me do that.

What advice might you have for young writers looking to get into writing for television?

The only lesson I can draw from my own experience is that you should do whatever makes you happy, whether there’s any hope of getting to do it professionally or not. (And the odds are so stacked against anyone in a creative field, chances are you won’t get to.) Get your work out there, and if the material is good enough, it’ll get noticed. But I think I’m also supposed to tell you to write a spec. That’s apparently a very useful thing to do.