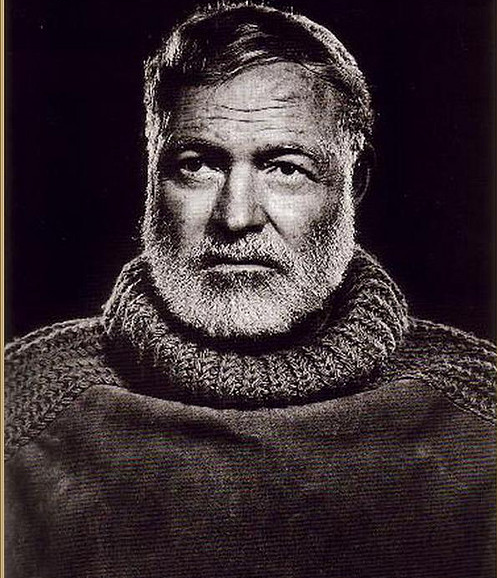 Ernest Hemingway is one of the most acclaimed writers in American history. He began his career as a beat reporter, but soon moved to Paris and fell in with the other writers and artists of the Lost Generation. He is the recipient of a Nobel Prize for Literature, and the author of many celebrated works of fiction, including Farewell to Arms, The Sun Also Rises, The Old Man and the Sea, and A Moveable Feast.

Though he died in Idaho in 1961, he met The Days of Yore at a diner on the Upper West Side of New York City in 2012 for an interview.

I’m not sure you’re allowed to smoke in here.

I’m aware of the rules.

You’re already on your ninth cigarette and we’ve been here three minutes.

I’m all out. Is there a place around here to get more?

We just sat down. Do you want to eat first?

[Hemingway stands and leaves the diner. We walk to a nearby bodega.]

So, growing up, were your parents involved in writing in any way?

My father was a doctor and my mother sang songs. She sang for a living. They wrote grocery lists and minimal essays. They did not write in that sense of the word. My father taught me to hunt. My mother taught me to sing. I enjoyed both.

Can you sing something for me now?

Sorry. Do you remember the first thing you ever wrote?

I wrote a monologue about the tree outside my childhood home.

From the perspective of the tree?

Oh, it was a sure-footed tree. Strong. It never wavered and I liked that. I used to look at the tree from my window and wonder things. And when my father and I would come back from fishing or hunting there it was. Rooted there. I thought a lot about that tree. The way it stood its ground.

Do you know if that tree is still standing?

You also wrote for your high school newspaper, correct?

Writing is not the word to use. Childish scribbles from the mind of a fool. Words were committed to a page. They were printed. That much is true.

What kind of books were you reading at this point?

The backs of high school women.

Ha. Was your goal to be a reporter?

Goals. No. I did things because I felt inclined to do them. Nothing more than that. Why does a stream have a current? Because it flows. You go where you go. That is the direction I took.

Got it. What happened after high school? Did you get a job?

[Hemingway purchases another pack of cigarettes. Then he punches the bodega employee between the eyes.]

Woah, Jesus! Why did you do that?

Sometimes a man looks at you askew. What was your question?

I asked about what you did after high school. Should we get him some ice?

I was a newspaper reporter. In Kansas City. I reported on backwards businessmen and homeownership. Nothing special. I was good but I only lasted a short while. The war started, you know.

You wrote a lot during the war, right?

You think I’m going to talk about the goddamned war with you?

Do you want to head up to a burlesque show?

There’s one in the area. At a club above a Persian restaurant I like. This girl called Silence performs a revue. Her body is strong, but she’s made of fragile stuff. She sings about deserts and dances to Sade. I know her mother. You’ll enjoy it.

You were still a reporter when you moved to Paris, right? Were you writing novels yet?

Look at the city pass by there. [He pauses for three minutes.] I remember being young. The unreasonable nature of things. Bewildering truths never seemed to clear. I moved to Paris with a girl. A woman. That much is true. Novels? Not yet. Not quite.

But you were meeting a lot of writers then. And artists. Did they inspire you to want to switch from journalism to the more creative side?

[To the cab driver.] Stop here.

[The cab stops at a corner of office buildings in the Financial District.]

Is this where the show is?

I need to go inside this building and retrieve something from a man. Then we’ll continue.

[Hemingway enters the building, while I remain in the cab. Twenty minutes later he emerges with a small box.]

I needed to retrieve this box.

No, but seriously. Why did you just go into that building?

I could stand for a drink. What about you? [To the cabdriver.] Take us uptown.

I thought we were seeing a burlesque show.

Ezra Pound used to dance. Did you know that? People think of him so sternly. Think poets were so stern and serious, but Pound loved to dance. He would move from side to side. He would take over a room. I hated to dance. I hated seeing people loose like that. Perhaps I was a frigid man, even in my prime. That could be true.

What was the first story you published?

You are so concerned with plot details. What about the feelings? That was all my life was then. A host of emotion. We lived our lives that way. That is how we moved and operated. If a timeline was made, I would have burned it. Somehow we made money and we wrote. We fought. We slept with each other and denied love.

Were you making any money?

We were making enough to live. Isn’t that all there is?

Was it hard to transition from fact-based journalism to creative fiction?

Fiction is facts. Facts are fiction. I need you to get out of this cab.

Did I do something?

OK. I mean…that’s fine. I’ll just get out here.

[I get out of the cab in Washington Heights. I get on the subway.]

One Response to Ernest Hemingway